Fusion FC started the game as the big underdogs, playing a side who had won the previous two provincials in a row and had also finished 5th at the nationals representing BC. They would also have two players in their starting eleven who were due to sign with the Whitecaps residency after the game, thus showing the quality of their squad! 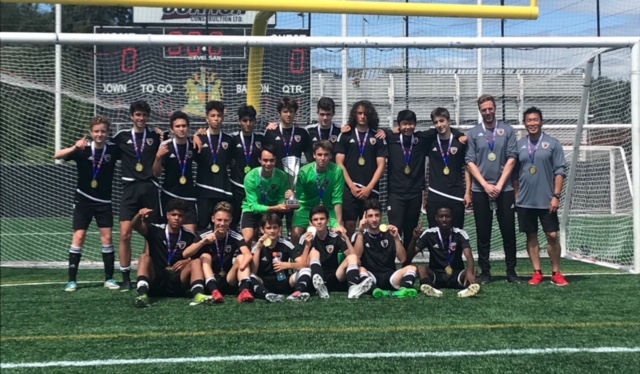 In our last two battles in the league, we had been majorly unlucky, suffering two defeats in both league games. Mountain would finish the season top and ourselves a respectful 4th place.

We kicked off the game feeling and looking confident in the first 15 mins. Eventually taking the lead through the soon to be (hat-trick hero Carson Buschman-Dormond) it was a lovely move down the right side from Omar Soliman, who pulled the ball back into the box, only for Carson to tuck the ball home with his trusty left foot.

Mountain FC began to grow into the game and started to control the ball. We had planned to let them keep the possession and remain compact and narrow, only to break on them at speed and try to hurt them on the counter-attack.

Their pressure soon resulted in an equalizer, with a snapshot after a rebound, catching our GK Luke Hardie out and finishing it nicely into the bottom left-hand corner.

The scores would be level 1-1 at halftime.

Mountain came out with plenty of confidence in the second half. They continued to dominate possession and kept us locked in our own half. Their pressure seemed to finally pay off, having won a free kick on the edge of the box, they converted off a rebound from a save from Luke Hardie, only for the goal to be ruled rightly offside!

This was a wakeup call for the Fusion 02 boys and they seemed to grow into the game, connecting passes and getting further into Mountains defensive third of the pitch.

Carson then showed lovely composure and dribbling ability, taking the ball past two players and slotting the ball calmly into the opposite corner of the net for his second of the game!

Fusion continued to grow in confidence and made life very difficult for Mountain to create any chances of note. Fusion would then hit the final nail in the coffin with a 3rd and final goal.

Connor Mrazek with the assist, played the ball into Carson’s pathway, only for Carson to score an almost identical finish, beating a couple of players and slotting the ball home for his hat-trick!

Mountain would throw everything they had at Fusion for the last 15 mins, but between excellent defending and goalkeeping, Fusion held on to become the first Boys Fusion team to lift the Premier provincial cup!

Overall it was a phenomenal team performance with everyone having to dig really deep to bring the cup home. The MVP was awarded to Carson for an outstanding hat-trick, this would be the difference maker between the two sides on the day!

The Premier Provincial Cup Championship capped off a successful season by defeating Coquitlam Metro Ford SC 3-2 in the Quarterfinals, Thompson Okanagan FC 2-0 in the Semifinals and Mountain United FC 3-1 in the final.

A great ending to a transitional season!