Over view of our 2008 intake outline. 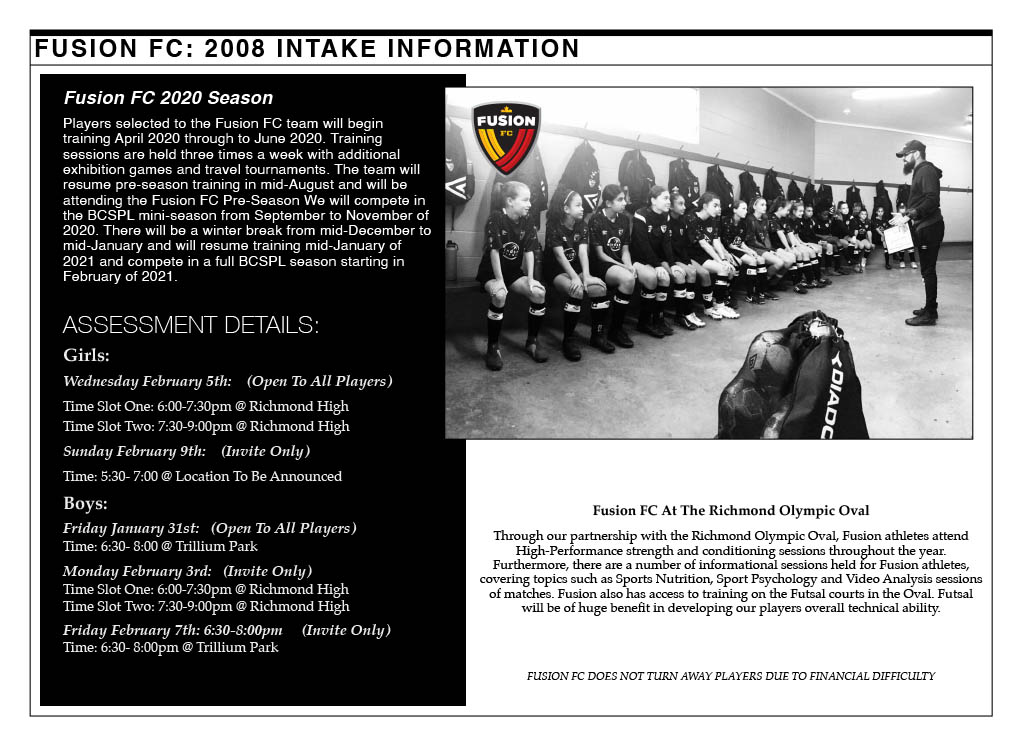 Fusion Football Club is for dedicated players wanting to play and train at a high level with like-minded teammates. Players will train in a competitive and fun environment while focusing on developing individual skills and basic tactics. We strive to encourage and nurture excellence amongst our players both on and off the field, as athletes and as young adults, in the communities to which they belong. Fusion Football Club strongly believes in player development.

Jeevan has been a staff coach with numerous teams at Fusion FC for the last 4 years. His time with Fusion has seen him as the Head Coach of teams on both the male and female sides of the club. Upon joining Fusion, Jeevan acquired his CSA National B certification in the spring of 2016. Jeevan joined Fusion from Richmond FC where he was a staff coach for 6 years. During his playing career, Jeevan represented Richmond FC where he went on to represent Richmond in 5 provincial championships and winning gold on 3 occasions. Jeevan also represented British Columbia in a National Championship, finishing with a silver medal. Jeevan also had the special opportunity to travel all over the United States, Europe and even parts of Asia during his youth playing career. Most recently, Jeevan has been the Head Coach of our 2003 Girls Team, and also the Head Coach of the 2005 Boys Team. The 2005 Boys Team has been with Jeevan since they joined the club at the Intake level.  Of these 2005 boys, three players were selected to the Whitecaps Residency Programme.

John’s highest level of playing soccer includes both Collegiate and CMISL.  His coaching career is unique as he started as a volunteer coach at the Grassroots level and developed from there.

John is one of the rare coaches in the province that has coached at all levels including Vancouver United FC, Vancouver FC, Fusion FC and Whitecaps Academy.

As the Head Coach of the 2006 Girls Fusion FC team he led them to win the 2019 Provincial Championship. Four of these players were selected to the Vancouver Whitecaps Pre Rex team.Tryout Fee: $25

Players selected to the Fusion FC team will begin training April 2020 through to June 2020.

Training sessions are held three times a week with additional exhibition games and travel tournaments. The team will resume pre-season training in mid-August. We will compete in the BCSPL mini-season from September to November of 2021. There will be a winter break from mid-December to mid-January and will resume training mid-January of 2022 and compete in a full BCSPL season starting in February of 2022.

Players selected to the Fusion FC team will begin training April 2021 through to June 2021.