“Where are they now?” Anelise Karakostas 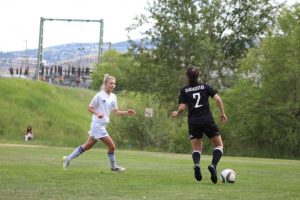 What was your favourite memory while playing for Fusion Football Club?

If I had to pick just one I think it would be the very first time I met the team during our intake year, we were all a little nervous and didn’t know what to expect and I don’t think anyone on the team would have thought that 5+ years later we would all be such close friends.

Do you stay in touch with your former teammates?

Of course! We still have our group chat going and just recently during Christmas break we all went out for dinner so we could catch up with each other.

What was the most useful thing that playing for Fusion Football Club taught you to help you perform at the Varsity Level?

The most useful thing that Fusion taught me is that every team will go through ups and downs but the most important thing to do is stick it out and keep enjoying what you are doing and to just have fun because if you enjoy it it is much easier to play than over thinking everything.

What has been the biggest difference playing at the collegiate level compared to youth soccer?

One of the biggest differences for me is the amount of playing and training that we do, during the four months of our season we did not have a lot of days off it meant we had to eat well, stay healthy, and take care of our bodies. During preseason in August we would have two a days almost everyday where as at Fusion I was use to just 4 practices a week.

How have you balanced the school work and your athletic commitments?

Its not too hard balancing school and soccer because at SMU all athletes have study hall which is a mandatory 4 hours a week of studying, you also need a certain GPA in order to play so having that keeps me focused on where my grades should be so I’ll be able to play during season.

What advice would you give to our current athletes in their pursuit for post secondary soccer experience?

My advice is pick the school that is right for you, go to it and see if you like the atmosphere. For me when I first got an email from my coach I kind of kept it in the back of my mind because I never really thought I would want to go to the other side of the country to Halifax, until finally I agreed to go for an official visit and I am so happy I did because as soon as I got to SMU I knew that was the school I should pick because of how great the people were. I think that even if you are going and playing varsity it shouldn’t just be about the soccer aspect you have to think about the next four or five years of your life and see if you can picture yourself staying there to get an education, because if you have fun playing soccer it shouldn’t matter what team you end up with because it’ll be enjoyable no matter what!